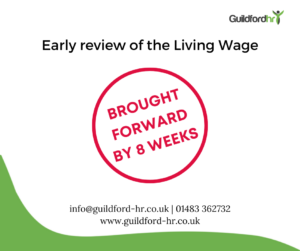 The Living Wage Foundation, which accredits employers who sign up for its voluntary pay scheme, is to bring forward the annual review by eight weeks to the end of September. This will result in pressure being placed on 10,000 employers to raise the rate of pay for those facing the financial squeeze being felt by 4.8 million low-paid workers across Britain who are being affected by the inflation rate of 9 percent.

Last year saw the living wage, voluntarily paid by 10,000 employers, rise by 4.2 percent across the UK to £9.90 and by 1.8 percent in London to £11.05. The larger rise seen outside of London was caused by the increase in rents outside of the capital. The legal minimum wage for 23-year-olds is now £9.50.

The Institute for Fiscal Studies has calculated that inflation for the poorest tenth of households is already running at more than 10 percent whilst for the richest, it is rising at about 8 percent.

There are fears that the living wage review may stoke inflation by higher wages. The Governor of the Bank of England has asked people, particularly those on higher wages, to “think and reflect” on whether they need a pay rise as this could fuel inflation and bring higher prices into the economy.

Household energy bills are at record highs with the price cap rising again in October, bills will have more than doubled in a year. Low-paid workers are hit hardest by inflation as they spend more of their household income on essential items such as food and energy.

Last week Rishi Sunak unveiled a £21 billion worth of measures giving every household £400 off their household bills, this will be partly funded by a windfall tax on oil and gas companies.

Contact Guilford HR if you want to learn more about these changes and how they affect your business: Contact Us

We would welcome an informal discussion with you to understand how Guildford HR can effectively partner with your business. Please either call us on 01483 362732 or contact us.

We use cookies on our website to give you the most relevant experience by remembering your preferences and repeat visits. By clicking “Accept All”, you consent to the use of ALL the cookies. However, you may visit "Cookie Settings" to provide a controlled consent.
Cookie SettingsAccept All
Manage consent

This website uses cookies to improve your experience while you navigate through the website. Out of these, the cookies that are categorized as necessary are stored on your browser as they are essential for the working of basic functionalities of the website. We also use third-party cookies that help us analyze and understand how you use this website. These cookies will be stored in your browser only with your consent. You also have the option to opt-out of these cookies. But opting out of some of these cookies may affect your browsing experience.
Necessary Always Enabled
Necessary cookies are absolutely essential for the website to function properly. These cookies ensure basic functionalities and security features of the website, anonymously.
Functional
Functional cookies help to perform certain functionalities like sharing the content of the website on social media platforms, collect feedbacks, and other third-party features.
Performance
Performance cookies are used to understand and analyze the key performance indexes of the website which helps in delivering a better user experience for the visitors.
Analytics
Analytical cookies are used to understand how visitors interact with the website. These cookies help provide information on metrics the number of visitors, bounce rate, traffic source, etc.
Advertisement
Advertisement cookies are used to provide visitors with relevant ads and marketing campaigns. These cookies track visitors across websites and collect information to provide customized ads.
Others
Other uncategorized cookies are those that are being analyzed and have not been classified into a category as yet.
SAVE & ACCEPT